FAR is relaunching in 2022 to release new music and offer some of the label's original releases to a new generation of experimental music listeners. On Jan. 1, FAR opened a new online shop through Big Cartel. Seven of FAR's releases from 2000 and 2001 are available for $6 or less. 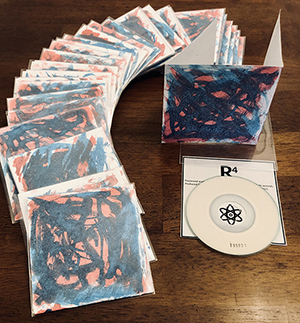 Like R4's previous two solo titles on this label, each copy of the mini CDR comes with a painted cover (water color on paper). Thirty-six numbered copies of this release have been made.

A few of the label's back catalog releases are available directly from FAR for the first time in two decades. These are unsold, well-preserved copies of the original editions that went into storage after the label ceased operations in early 2002. A limited quantity of each of these are available. Currently FAR's web store has in stock:

Seven FAR releases are part of a trove of rare and endangered titles that have been preserved by Marc Benner and reissued with permission from the artists in downloadable/streaming format on the Oxidation Records label. Available via Bandcamp on a "name your price" basis are:

In addition to its archival releases, Oxidation has been putting out excellent new music as well. Some of the Illinois-based label's disc and cassette titles have included works by Jorge Castro's new DEFORMA project, and Martin Steinebach's Compest and StillStand.

Correspondence is welcome! Write to Fusion Audio at fusionaudiorecordings@gmail.com.